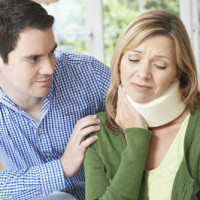 Almost everyone has experienced a rear-end accident in their lifetime, either as a passenger or driver. While you might walk away from such an accident with a barely-sore neck, it’s also possible to be saddled with weeks, months, or even years of neck pain or neurological symptoms from injuries received from a crash. One team of researchers out of Sweden examined what factors are present when a victim experiences long-term symptoms versus short-lived effects of a rear-end crash.

While accurate research on the effects of car accidents can be challenging to conduct due to the inability of researchers to use human subjects in serious laboratory-based car accidents, the prevalence of automotive event data recorders in recent years offers academics a new way to study how certain factors in a crash affect victims. These recorders gather information from sensors located throughout the car, including whether or not a car was accelerating when an impact occurred, what the car’s speed was, and whether the driver applied their brakes, recorded at the time that an impact occurred which was of sufficient severity to deploy or nearly deploy a car’s airbags.

In the case of the Swedish study, the data came from a car insurance carrier which had been gathering this information from customers’ cars after they were involved in rear-end collisions. In examining the data, alongside information on the duration and severity of the victims’ whiplash-associated symptoms gathered from interviews and medical records, the researchers determined that the factor which had the greatest effect on the severity of a victim’s injury was the mean (average) acceleration of the car at the time of impact, rather than the change in velocity (speed). The length of time that a victim’s injuries would last rose steadily when both the change in velocity and mean acceleration were high at the time the crash was recorded. The study determined that, when cars are traveling at the same or similar speed at the time of a crash, the risk of neck injuries is low, and that women were more likely than men to report immediate whiplash effects of a rear-end crash.

If you’ve been injured in a crash in Alabama and need seasoned legal assistance to ensure you’re fully compensated for your injuries, contact the Mobile offices of the Carter Law Firm for a free consultation, at 1-844-202-4050.