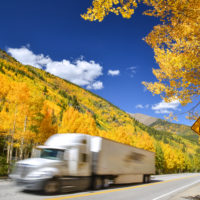 A new rule, now available for public comment, would require large commercial vehicles weighing over 26,000 lbs. to be outfitted with a mechanical speed limiter. While some independent trucking groups are opposed to the rule, others have spoken out in favor of capping large trucks at a certain speed, both to increase safety and to reduce fuel costs.

Both the National Highway Traffic Safety Administration (NHTSA) and the Federal Motor Carrier Safety Administration (FMCSA) have proposed similar rules for the sectors of the commercial transportation and shipping industry that the two federal bodies oversee.  The rules would require that large vehicles such as buses, tractor-trailers, and semi-trucks use speed limiters, capping that vehicle’s speed at 60, 65, or 68 miles per hour, depending on the final results from the comment period.

Dr. Mark Rosekind, administrator of the NHTSA, pointed out the great increases in safety to be gained from the forced speed limit. “Even small increases in speed have large effects on the force of impact,” he said. “Setting the speed limit on heavy vehicles makes sense for safety and the environment.” Fully-loaded commercial trucks can weigh up to approximately 80,000 lbs. At that weight, trucks require a great deal of distance to stop, and the distance becomes exponentially longer when trucks are traveling at highway speeds. According to research conducted by the Department of Transportation, capping large commercial vehicle speeds at 60 mph could prevent up to 498 fatalities and up to 15,000 injuries each year in trucking accidents on our nation’s roadways.

Safety advantages are not the only benefits to the use of speed limiters. Anthony Foxx, the Secretary of Transportation, stated, “there are significant safety benefits to this proposed rulemaking. In addition to saving lives, the projected fuel and emissions savings make this proposal a win for safety, energy conservation, and our environment.” Department of Transportation estimates value the reduction in energy consumption and improved environmental health at around $800 million annually.

Safety experts are not the only ones who are in favor of the rule. Trucking industry representatives also believe that large vehicles should be speed-limited. The best thing you can do for [fuel economy] and safety is lower speeds,” said Mark Rourke, the CEO of transportation company Schneider.

If you have been injured in an accident with a large truck in Alabama, seek the compensation you need to heal and get back on your feet by contacting the personal injury lawyers at the Carter Law Firm for a consultation, at 205-202-4050 in Birmingham and 251-433-6500 in Mobile.