18 Wheeler Crashes on the Rise 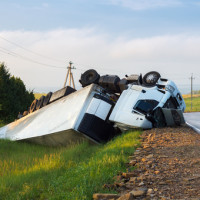 Truck accident injuries are more common than you might think, with 104,000 people injured in truck crashes in 2012, according to the most recent report made by the National Highway Traffic Safety Administration (NHTSA). The total number of injured persons marks an 18% increase in injuries over the previous year. Truck accident fatalities also increased by 4%, from 3,781 in 2011 to 3,921 in 2012, the latest year for which data were available.

The following is a simple outline of the NHTSA report regarding incidents involving large trucks during 2012:

A basic mathematical analysis shows that a person in a vehicle is four times more likely to be injured or killed in an accident involving a tractor trailer than the driver of the truck.

Another fact from the NHTSA report is that in two-vehicle accidents resulting in a death, trucks were rear-ended more than three times as often as a non-truck vehicle.

Truck Accidents on the Rise

The number of trucks on the road continues to rise. The easing of regulations allowing some Mexican trucking companies to move cargo within the United States and the increased pressure placed on truckers by economic conditions makes the road a more crowded and therefore more dangerous place as time goes on.

Tracy Morgan, from Saturday Night Live, was riding in a vehicle that was rear ended by a truck. He suffered serious injuries, and another passenger in the vehicle was killed. The investigation concluded that the driver of the truck was tired; he had been up for 18 hours prior to the accident. Litigation in that accident is still ongoing.

If you are involved in an accident with a tractor trailer or you are the relative of someone killed in one of these accidents, do the right thing and call an experienced attorney today. There can be multiple factors involved in this kind of civil litigation and if you have suffered, it is imperative that you have the right kind of legal team on your side.

Call our offices today. Our consultations are free, and there are no fees unless we collect for you.